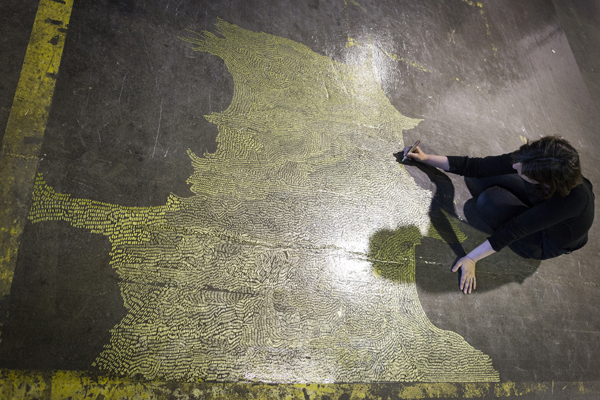 Eleni Papaioannou's artistic practice examines the relationship between artwork and urban space, the notion of the ephemeral, and the interrelation between spatial movement, material and sound. She creates large-scale site-specific installations and through her choice of locations makes associations between the work and architectural space. Her work is usually shown outside the confines of exhibition spaces in which the audience stumbling upon the work as they pass by, in order to change the viewer's perception on place and time.
In her installation/performance “…'….”….”….”…” the artist will interact with the building and the surrounding place, by leaving traces of tiny gestures in the space.
After visiting the Centre for Arts and Urbanistics in Berlin, ZK/U and observing the place she decided to mark several small elements as well as a big part of the soil of the building with short golden lings. With her action, corresponding to several preexisting traces in the space like the orange fence in the backyard of the centre, Papaioannou invite the audience to reflect the action of leaving and observing traces in urban space.