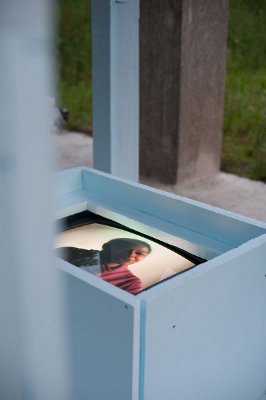 In her new mixed-media installation “Tamata-namama” created especially for the Sri Ganesha Hindu Temple in Berlin the artist examines the role of sacrifice in modern society. She combines structures and symbols of sacred architecture to build a self-contained temple. In the centre of the temple a video monitor plays the role of an altar.
The video shows short interviews from people of different religion and age, talking about the meaning of sacrifice in their everyday life.
The temple made by the artist, acts as a border and shell between public and intimate space in order to protect the personal confessions.