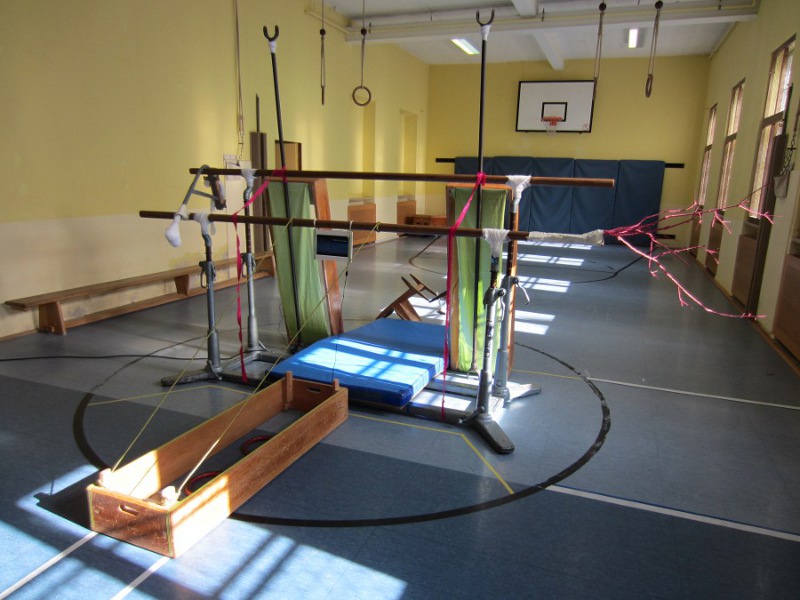 In her multimedia installation Athletics, Papaioannou explores the connection of competitive sport and gold. Focused on the performance pressure experienced by young athletes in training, the artist explores issues such as national identity, efficiency, fame, pride but also fragility, physical and emotional pain and failure.
Situated inside a gym, the installation consisted of several elements: - a three-dimensional construction connected with 3 video monitors, showing scenes of young athletes in training, a floor drawing made of tapes and fictitious flags, designed by the artist.
The construction was created by replacing and reconstructing several parts of sports equipment, which were then connected to 3 video monitors, as well as branches, bandages, circles and ropes. Each monitor represented a different point of view: the main monitor showed a young girl performing floor exercises in slow motion. The second one explored the relationship between a young athlete and their coach, which could also be a relationship between a girl and her mentor, the third monitor dealt with the emotional and physical strain of performance pressure.
The floor drawing expended from some existing marks can be read as choreography of movement in space, like visual signs and rule-traces of unknown games.
The hand-sewn, devised flags on the opposite side of the room point to a further aspect of competitive sports: the strong national identification, which forms the basis of every international competition and under which any other identity disappears: winner or loser, the athlete represents his/her nation over and above everything else.


The multimedia installation "Athletics" was presented at the gym in the Old DGs in Schwabach in August 2013 and has received the Jury Prize at the biennale ORTUNG VIII / Under the Sign of Gold".